Memories of Shops, Companies and Work

Remembering the shops, companies and businesses in Tilehurst

Old copies of the parish magazine from 1920, 1922 and 1941, show advertising for the perhaps surprising and diverse collection of businesses in Tilehurst.

Many of the recollections here mention Francis Bros, a local builder, who made a great impact on Tilehurst. As a good employer, they seemed to look after their workers and arranged outings for their families. 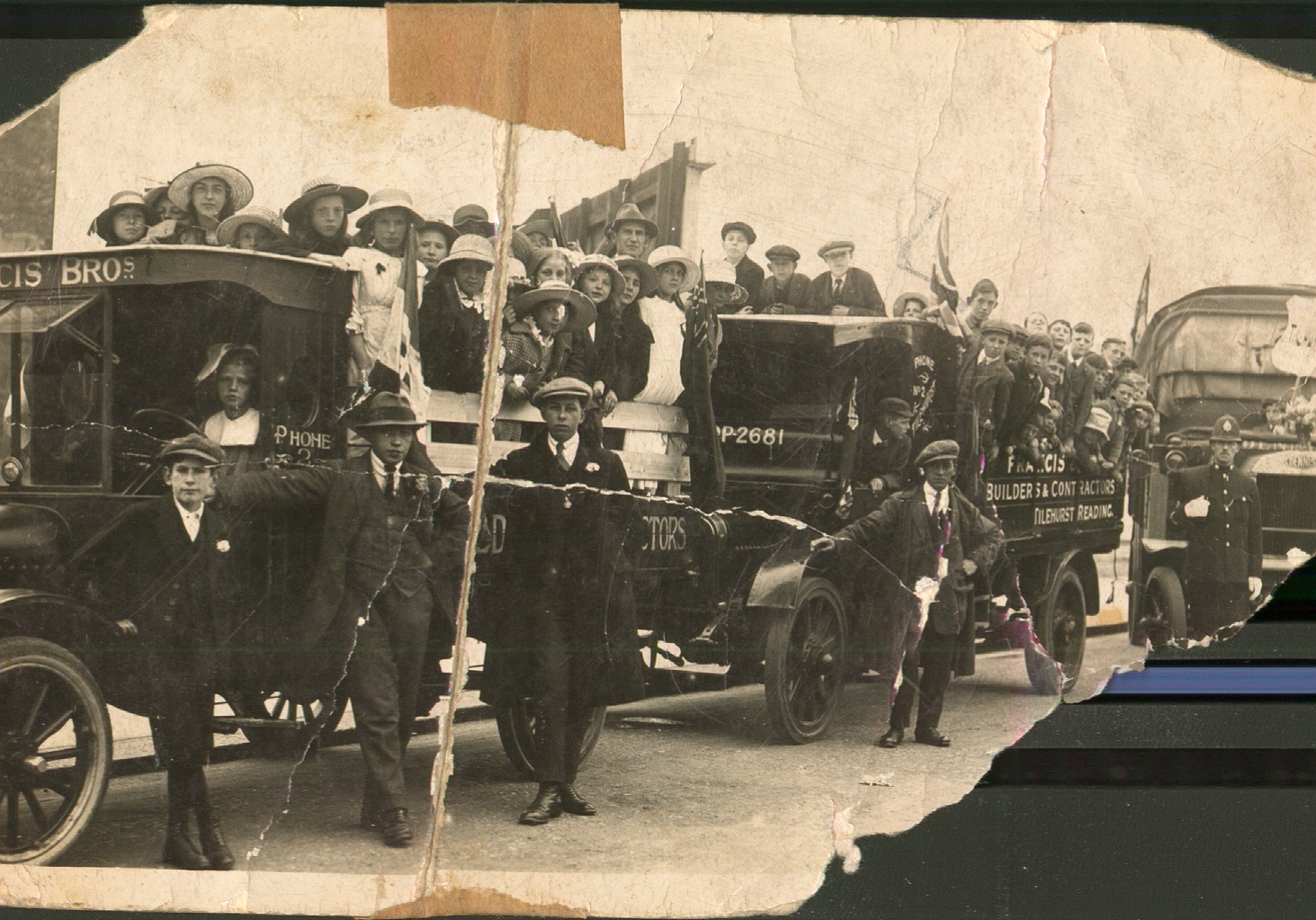 Here is the start of one such outing - probably to Hayling Island.

This newspaper cutting lent by Fred Wickens, tells of another outing organised by Francis Brothers. Click on the photo to see a bigger picture and you should be able to read the story. You may also recognise some of the people. 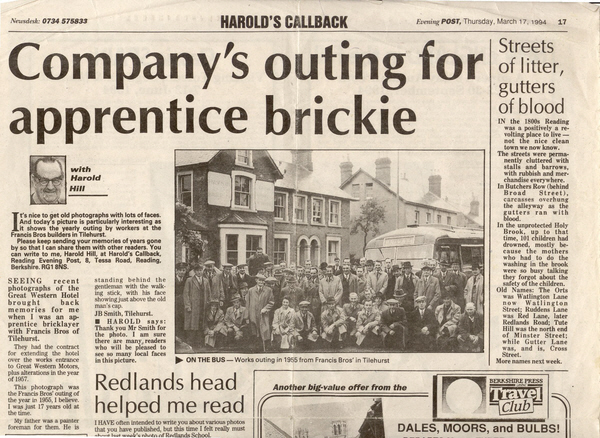 You can see that the starting point for the trip is outside the Francis Brothers Yard in Armour Road.

There was branch of Jobs Dairy in School Road. You can read about it in their website www.jobsdairy.co.uk/tilehurst.htm.

When we lived in Caversham we had milk delivered every day. The dairy was nearby and it was called Ellis and Heading. When we moved to Tilehurst we were really pleased to find that just round the corner was a dairy that did milk deliveries too. There was a small shop at Jobs where you could buy extra milk, cream and all sorts of other goodies.

The milk was delivered every day by a regular milkman, and on a Friday he would come in the early evening to collect the money for the week,

On one such evening, there was a knock at the door. I went to open it and my young son followed me up the hall to see who was there. When I opened the door I said to the milkman to wait a minute since I just had to get my purse. I could hear the milkman talking to my son. "Do you know why the stars seem to twinkle" he said. "No". "Well, you see, if you look carefully at the stars they emit a light which follows a path down to earth. In between the stars and the earth there are a lot of dust particles, and these have the effect of breaking up the light so it gives the appearance of twinkling." By this time I had got the money ready, and I paid him. But we learned in that short space of time that the milkman was a very enthusiatic amateur astronomer.

From then on, weather permitting, as he collected the money he would give us snippets of information about the constellations, the movement of the planets etc etc.

The house we live in is quite old. In the early days, there were no local rubbish collections. The garden was very overgrown and eventually we managed to clear it, right down to the bottom. We were surprised to find the remnants of the rubbish dump. It wasn't exactly an archeological dig , but we loved finding things. In particular there were a lot of old bottles including this prime example of a Jobs Dairy milk bottle.


The Wool Shop in the Triangle 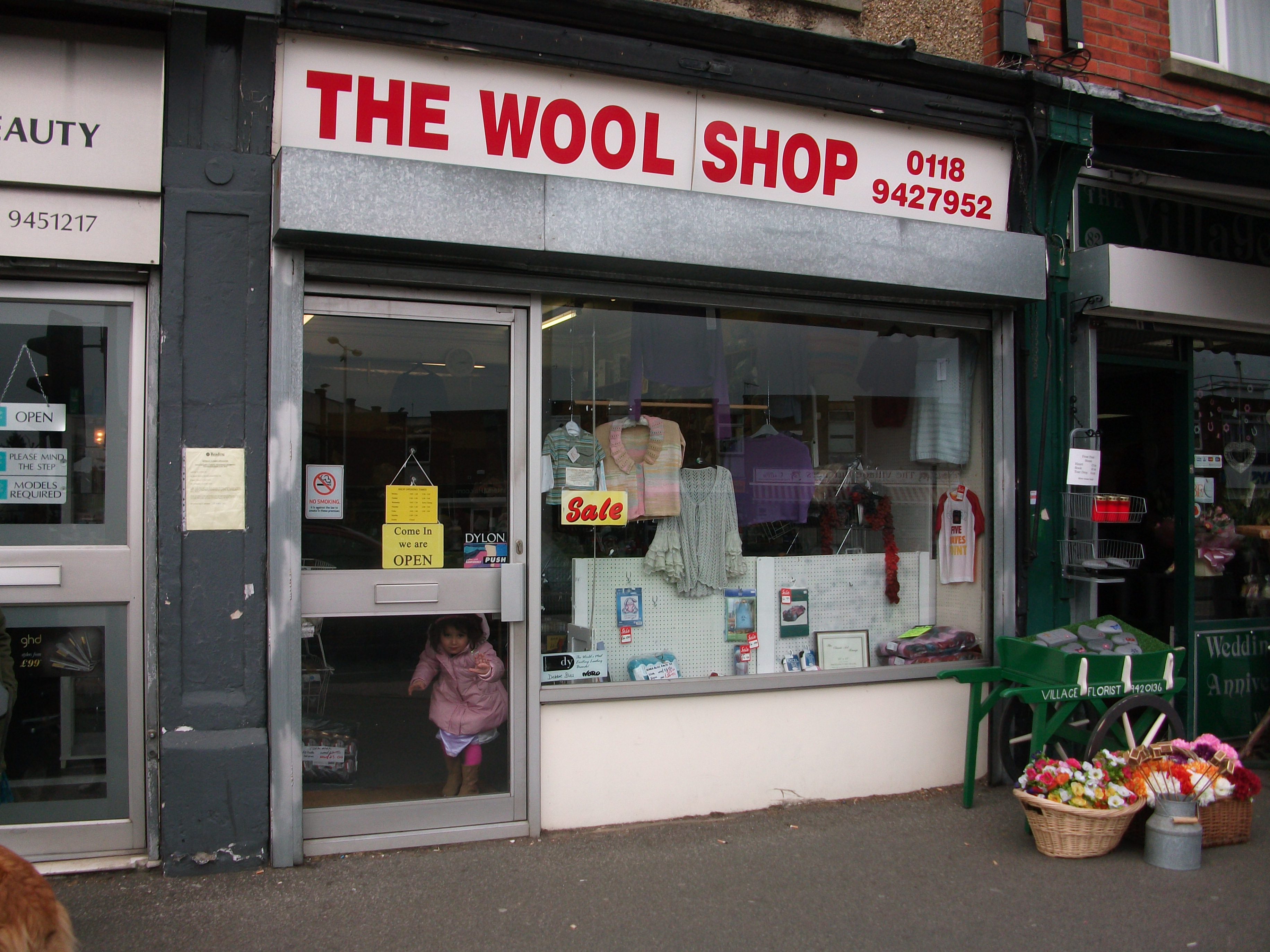 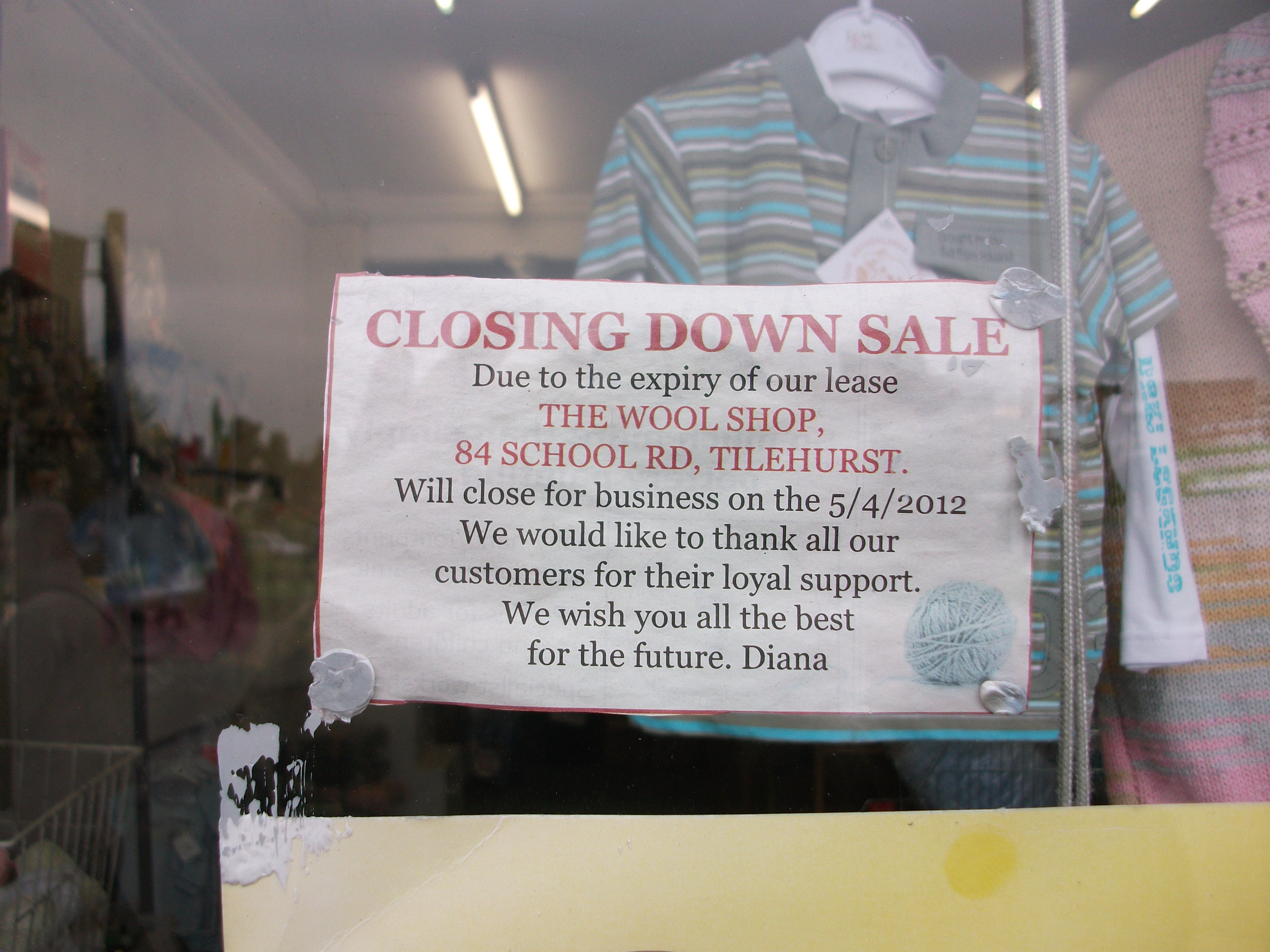 Read the Warings Story from one of their old leaflets and here for a more up-to-date version of the Warings History from their own website.

Two photos of Warings sent in by Paula Miles

If you read the history of Warings in their leaflet you will see a reference to the Cake Shop in Armour Road.

You can see in the window that the Warings catchphrase at the time was Special Bakers for Special People.

I was walking to the Co-op and looked up by the crossing to see this strange sight.

The Turkish Barbers that is now (in 2018) on this site were havng a new shop front fitted and had revealed the name of a previous shop. This is going back a bit! I am glad to say that the Sweet Shop facade is still safely under the new one. I did suggest that they give the old shop name an airing once a year!

Graham the Barber is at the top of Norcot Road. Looking at it from the outside you would not imagine that inside there is a huge number of photos and pictures of old Tilehurst. These are a few.

In the 1970s, Alan the Fish man used to come down from Grimsby in his van and set up a wet fish shop in front of Cannings as it was then. There wasn't a fish shop in Tilehurst at the time so his shop was most welcome. He was busy most of the day, and if you didn't get there early he might have run out. I think he set up shop somewhere else as well, but then he went back to Grimsby - only to come back the next week. Cannings then became Berkshire Vintners, and I suspect that the people that ran Berkshire Vintners were not best pleased at having the fish shop in their forecourt. Briefly, Alan the Fish set up in the car park at the White House (now the Victoria). Sadly not for long. He was much missed - and still is.

The Man who sold Wool in the Village Hall

I was looking for some wool recently and couldn't find what I wanted. I then started reminiscing about the old days and remembered the Wool Shop (see above) and thought it was a shame that it had closed. And then I remembered the 1970s with more regret. A man travelled up from the south somewhere and set up his haberdashery wares in the village hall, in Victoria Road. He came once a month. For sale he had wools, materials, bric-a-brac such as buttons, sewing cotton and knitting needles. What a handy man he was. I can't remember what his name was but he was a much needed resource.

And then I remembered that in Armour Road, Jean had a shop that sold childrens clothes and as well as that she sold wool and sewing materials too. You could see her sitting outside the shop when noone what buying. She used to knit items of clothing for people. She could talk and knit at the same time.

You can read more about Jean.